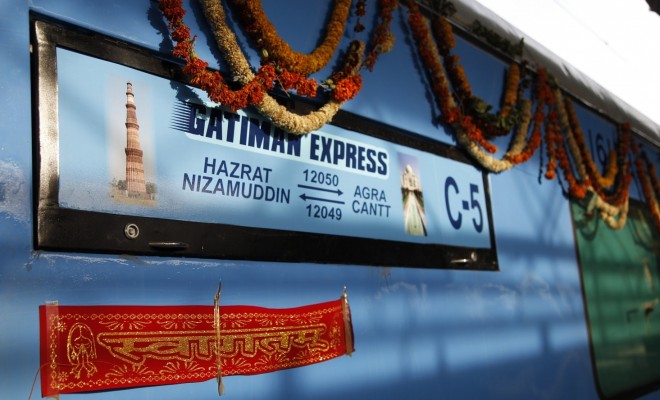 On a Fast Track

On April 5, the Indian Railways set another landmark. Gatiman Express, said to be India’s “first semi-high-speed train, was flagged off from Nizamuddin Railway Station in Delhi by Railway Minister, Suresh Prabhakar Prabhu. Packed with the latest facilities and improved amenities and catering services, this train is meant to cover 188 km long distance between Nizamuddin railway station and Agra in 100 minutes flat.

For those familiar with the traffic on Golden Triangle, needless to say, this is already becoming a popular mode among those wanting to cover Agra in a day. Booking and reservation status for the weekends is already running houseful, rather wait-listed which is a good indicator for popularity of express trains.

With a seating capacity of about 736, the train, which will run on all days of the week, except Friday, to the tourist hot-spot of Taj Mahal, has more firsts to it — such as train hostesses to provide hospitality and on-board catering, bio-toilets, guided tour packages, free Wi-Fi and catering by IRCTC which is offering choices in terms of cuisines for meals. As an add-on, IRCTC is also offering two different Agra guided Heritage packages to coincide with the existing time-table of the train.

The monthly Indian Railways magazine, Rail Bandhu, is also a part of this journey. And by the virtue of being the only one of its kind, Rail Bandhu makes for a perfect platform for an advertiser to connect with the well-travelled, well-informed passenger. Gatiman’s commuter profile includes businessmen, lawyers, tourists among others. This number of 39,000 plus travellers on this train (per month) of course, is in addition to Rail Bandhu’s readership of over 49 lakh per month, covering 24 Rajdhani Express trains, 23 Shatabdi Express trains and the air-conditioned coaches of 41 Duronto Express trains. Though the print version is available for on-board reading only, you can now download the magazine app on your Apple or Android phone and carry it with you at all times.

In India, Indian Railways remains the lifeline of the country and a highly dependable surface transport. And as the Railways does not allow any advertising, advertisers are left with no option but to put up their brand recallers outside various stations and other vantage outdoor locations. Time advertisers cashed in on this reach and medium.