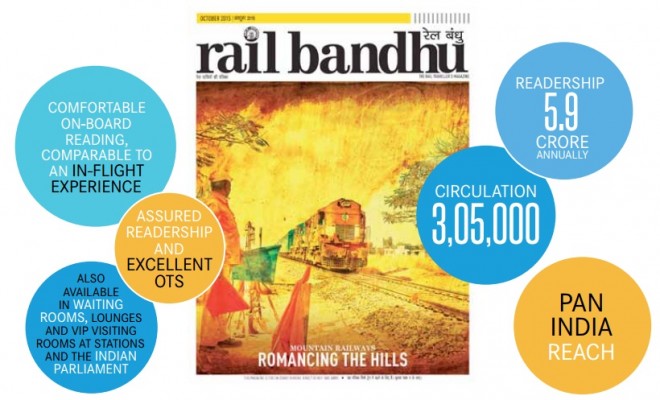 MaXposure Media Group, a corporate publishing company with over 30 titles in its portfolio, has been awarded the contract to publish Rail Bandhu, the only official on-board magazine of the Indian Railways. The organisation won the contract to publish the Rail Bandhu magazine for three years following an open tender. The magazine is distributed free of cost in all full-service trains – Rajdhani, Shatabdi and Duronto.

According to the press release, Rail Bandhu, a bilingual (English and Hindi) magazine published every month, reaches 21 state capitals and more than 119 cities, and is distributed in 129 trains every day. This includes 24 Rajdhani Express trains, 23 Shatabdi Express trains and the air-conditioned coaches of 41 Duronto Express trains. With a readership of over 49 lakh per month, Rail Bandhu has a higher readership reach than any travel or news magazine in India. Launched in 2011, Rail Bandhu is also available in waiting rooms, lounges and VIP visiting rooms at railway stations.

Elaborating on the magazine’s strong readership and pan-India presence, Prakash Johari, MD and CEO, MaXposure Media Group, said, “The total number of flyers catered to by all the airlines in India put together is approximately 66 lakh every month. In comparison, Rail Bandhu is read by almost 49 lakh passengers every month who travel in these three premium trains. Without any doubt, Rail Bandhu is the only magazine in India to have such an extensive Pan-India reach catering to a premium audience.”

Talking about Rail Bandhu’s premium presentation, Vikas Johari, Publisher and COO, MaXposure Media Group, said, “The magazine, in its new crisp and smart avatar, will offer the readers comfortable on-board reading, comparable to an in-flight experience. It will appeal to the evolving aspirations of the frequent travellers and also engross long-distance passengers, including families, for whom the train is not just a medium of travel but a part of the holiday experience. It will add to the romance of the great Indian train journey.”

Rooted in current national interest, the articles and design of the magazine will not only be information-packed but also reader-friendly, lucid and interactive to keep the travellers engaged and help them plan their holidays and travel. From experiential travel narratives to expert tips and opinions on the latest trends in leisure and entertainment industries as well as news from the Indian Railways, Rail Bandhu will involve the best authors, photographers and personalities to highlight a wide range of subjects.