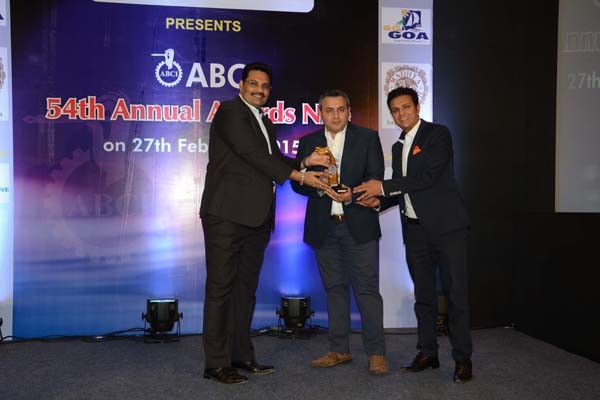 At the 54th ABCI Annual Awards Nite held in Mumbai, MaXposure Media Group was crowned “Champion of Champions” for winning as many as nine awards for its Corporate Publishing titles including four Golds, three Silvers and two Bronze. The special “Champion of Champions” trophy was bestowed upon MaXposure for winning the maximum number of awards. The awards were handed to the winners by special guest Hemant Nerurkar, Chairman, TRL Krosaki Refractories Limited (formerly Tata Refractories Limited).

SpiceJet’s in-flight magazine, SpiceRoute, was the most lauded publication for the Group with two Gold awards and one Bronze for Best Special Feature and Best Photography categories respectively while they won the Bronze for the Best Special Column.

Five other magazines from MaXposure Media Group won prestigious awards. Air India’s in-flight magazine, Shubh Yatra, bagged the Gold for Best Bilingual Publication while Mercedes-Benz Magazine got the Gold for Best External Magazine as well as a Silver in the Best Magazine Design category. CREDAI Times, published for the apex real estate body CREDAI, got a Silver in the Best External Magazine category and the Havells magazine, Watt’s Up!, was awarded Silver for the Best Internal Magazine. Select CityWalk’s City Walker won Bronze for the Best Photo Feature.

Accepting the awards in the presence of prominent think tanks and global business leaders, Prakash Johari, MD & CEO of MaXposure Media Group, said, “MaXposure has always strived for excellence in the field of custom and corporate publishing and we are glad our efforts are being recognized on such a prestigious platform. I thank ABCI for these recognitions, especially the Champion of Champions trophy. Kudos to our editorial and design teams and special appreciation to our clients for making all this possible.”

MaXposure Media Group is the largest custom publisher in India and the largest in-flight magazine publisher in South Asia. It is a full-service media company spread across the dimensions of Publishing, Creative Solutions, Events, Custom Publishing, Ambient Media, International Representation and Outsourcing.

Market leaders in all its segments, MaXposure’s expertise lies in capitalizing the travel audience with its various in-flight magazines which provides end-to-end solutions to the airline and in-turn helping in increasing the revenue of the airline. The group has a global presence with 10 offices worldwide and has 11 offices pan-India.